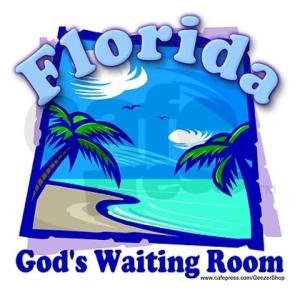 If you heard you were going to be living in God’s waiting room, what would you think?  For me, it had a charming connotation.  For Bill, rather negative thoughts!  He had heard this about Florida, but I never did (that I recall).  The first time I heard the phrase, it was in a City Confidential TV show about our new soon to be home town!

We moved here exactly seven years ago!  Wow, how time flies!  In our 36 1/2 years together (and as we like to joke, “on and off”), we lived in Virginia, Alabama, New Jersey, back to Virginia and now in Florida.  Until we moved to Florida, we probably knew only about 15 people who died, including both of our dads and my dear brother-in-law Steve.  I do recall the year 1999 was a particularly sad year.  I attended 10 funerals, which included my dad and Steve.  The other funerals were mainly parents of friends and the other’s were relatives of co-workers.  Now I do know, as you get older, you will know more people who die, but what has happened to us has to be some record!  I know we are not that old!

I do need to add a caveat here and take a time out.  My husband and I were privileged to play hosts to nationally syndicated author, film maker and really, a comedian or at least a humorist, staying with us for four nights.  Have you heard of Bill Myers (www.billmyers.com)?   He more or less set the tone that started me down this road!  He was in Florida for a week, talking to students in Ft. Lauderdale, Orlando as well as our little ol’ sleepy, rural town.

In addition to wonderful conversations over breakfast, I heard him speak five different times:  at a youth rally Saturday night (about the dark side of the supernatural);  a mixture, but mostly older people Sunday night (about Christianity and the arts – particularly about film producing, movies and TV); and two different talks to students from 1st grade to 12th grade at a small private Christian school (his “Just Say Yes” to God – testimony and he taught a creative writing class); and then finally address another mixed group, geared to youth Monday night (his favorite talk about the Glory of God).  He impressed everyone, entertained us, educated us and just helped us know our Lord God in a more intimate way.  It was in a talk to the elementary students, where he somehow talked about a

national survey of “old people.”  You know, really old people, people in nursing homes.  He was trying to encourage the youth to reach their full potential, and I hope he did, but he sobered me up!  He went on to say, these old people were asked, “If you could live your life over, knowing what you know now, how would you live?”  The number one answer was to not live so carefully, wishing they had taken more risks.  (For those who know, for three years I was focused on how to prevent youth from using drugs and alcohol – because they do engage in a lot of risky behaviors-so I was freaking out a bit.)  But the second response was that they all wished they had done more things that enhanced the Kingdom of God or that had eternal consequences.  Now this was what I was hoping to hear!  I have been thinking a lot about this these past few months as I have been helping to coordinate a huge upcoming youth rally with Chad Varga as well as the past two weeks, helped coordinate the youth rally at our church with Bill Myers.  Refreshing to think about making a difference in the lives of youth – differences that have eternal consequences!

So back to God’s waiting room!  I just realized, since we have lived here, I’ve attended nearly 20 funerals, but missed another 10, which were either held out-of-state, we were out-of-town, or there was no service (sadly one dear friend would not allow one to take place).  So in 7 years, 36 people have died that I had a relationship with (or with their family member) just here in Florida.   So maybe there is something to the fact Florida is known as God’s Waiting Room.

Well, this sounds like a morbid post today, but it is a fact of life!  So I guess you can say, I may be unwittingly becoming an expert in end of life matters.  As Christians, we do rejoice in the Blessed Assurance, not only will we be reunited with our dearly departed family and friends, but we will also be with our Heavenly Father for eternity!   We rejoice in the death process as it is a fact of life – we will all one day die: “And as it is appointed for men to die once, but after this the judgment…”  (Hebrews 9:27)  For those who have given their lives to Jesus, we all know the scripture, John 3:16, “For God so loved the world that He gave His only begotten Son, that whoever believes in Him should not perish but have everlasting life.”  The good news is that as far as I know, all 36 made it into the Kingdom.  All had at one time or another, publically professed their belief in Jesus.   However, not all exited this world in good relationship with family members.  In fact, a few had many unresolved family issues and that is what I am most concerned with.  And the one who would not allow a funeral or memorial service had the most unresolved family issues.  (Did I mention my husband has an aversion to funerals?  If he shows up, and he did to about 4 of these, it is nothing short of a miracle!)

Years ago, when Billy Graham was in his late 80’s (he was born in 1918) or so, he confirmed what he knew where the Bible said, “Life is but a vapor.”  (He uses the Kings James translation of the Bible.)  I thought, well, ya, he is old so to him, I can see that!  But for me, I was still too young to think like that….even though the Bible warns us!  I have read and studied the book of James many, many times.  I think that book was written for me, in fact, because there is so much in it that seems directed at me!  But in all the times I read and studied it, this one particular scripture, James 4:14 in the New International Version did not hit me like it does today:  “Why, you do not even know what will happen tomorrow.  What is your life? You are a mist that appears for a little while and then vanishes.”  Mist translated is also vapor!  Life is too short to have unresolved family issues!  Life is meant to be lived to the fullest!  And life is meant to consider the afterlife!

We have to be careful and not say to live however you want, but to know there are consequences in everything we do.  I think that is part of physics, which is beyond my intellect.   But what is within my intellect is what happens to people at the end of their lives.  If their death is not sudden, and all but one of the 36 were, they had time to prepare for their

deaths.  They all wanted to be surrounded by their loved ones.  And for most, they were!  But for one person, with the many unresolved family issues, she only had her two daughters with her and a few close friends.  She had been estranged from her daughters for years.  And subsequently, she was estranged from their husbands, their children and grandchildren.  She wanted nothing more than to be with family but they could not resolve their issues until the very end.  fortunately, there was some reconciliation.  But there were lost years of family celebrations, weddings, birthdays, holidays.  Lost years of hugs, tears, laughter.

I guess what I loved most about Bill Myers visit was his favorite talk, about the Glory of God.  And that is what I want to end with!  No matter how we live our lives, we all will exit this world and for us Christians, we know that to be absent in the body is to be present with Jesus!

2 Corinthians 5:7-9 “For we walk by faith, not by sight.  We are confident, yes, well pleased rather to be absent from the body and to be present with the Lord. Therefore we make it our aim, whether present or absent, to be well pleasing to Him.”

Our small family living in a 5th wheel following Dads work as a rock fall technician... what could go wrong?

A Summer in Togo