He appears so confident!

While Bill never doubted he could drive a 40′ motor home, he had serious doubts after the first trip.  We purchased it in Cocoa, FL, then drove to Suwannee River State Park, Live Oak, Florida then to Troy, Alabama and then to our final destination of Red Bay, Alabama. Read about that journey here.

He said starting out on I-95 North was not the best way to get broken in. But once we turned west on I-10, he was a bit more confident. And then things went pretty well until we got close to Birmingham, Alabama….reminiscent of I-95 North. But worse! And then things were ok from there to the border of Mississippi and turning north to Red Bay, taking Mississippi County Road 23. That’s where Bill’s white knuckles about had it! It’s a very narrow, winding road without any berm for safety if your wheels go off the road (like when another big truck passes you and you need to move over close to the edge of the lane).

After a really wonderful experience in Red Bay, we needed to start figuring out how to get to our next destination, Fredericksburg, Virginia. Bill really wasn’t looking forward to the mountains, or driving in rain. But since we needed to get there as soon as possible (we spent 4 days longer in Red Bay than would have been ideal), we had to carefully select the route. So lots of time went into finding the “perfect” route for the first leg of the journey. There were three routes to pick from between Red Bay and Jasper, Tennessee. The fastest and shortest route went around Huntsville. Strike that route. Next was to go slightly north. Or take a longer route, but avoiding the major cities, more of a southern route. So we picked it, thinking it would not be in the mountains. At best, we should be there in four hours, plenty of time to still enjoy the day and take a good walk since we left at 9:00 am. (The mountains show up in this pic, but not on our original map…or at least we didn’t see them.) 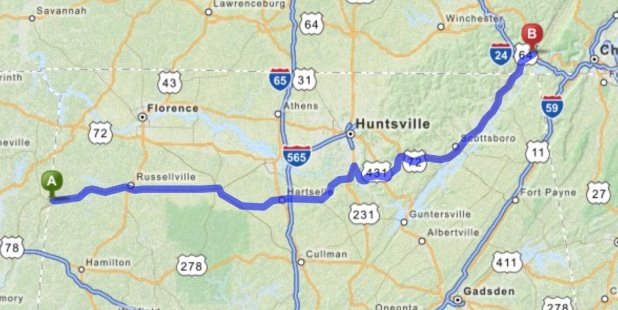 It SHOULD have been approximately 180 miles and 3 1/2 hours from Red Bay to Jasper, TN.

We are starting out with our new navigation system (Garmin) in the RV with Debbie still following in the car with the relatively new navigation in the new (old) Cadillac, SRX. Wouldn’t you know we couldn’t get them to match, so it was a bit confusing.  Bill decided to just read the paper directions we printed. But he forgot he was still trying to get comfortable and couldn’t grab them while driving….So we missed that first turn!

So Debbie’s navigation system recalculated and recalculated and recalculated.  So she called OnStar which is a courtesy with our car purchase. They tried to recreate the trip for her – but Bill had the paper directions and Debbie could only say “southern and avoid big cities.”  Bill was following and really doesn’t like to talk on the phone (no hands free set up for him). Debbie decided to pull into a “Visitor’s Center,” Wheeler National Wildlife Refuge, to talk about the route.  We did get to talk….and then….

No Visitor’s Center in view!

OOPS, this means he will have to make a U-turn as there really wasn’t a visitor’s center as Debbie had hoped, at least not near the road. We both took it in stride…at least the weather was good and the road was flat (as in no mountains).

We jumped on I-65 and headed north, noting it was now going to take about 4 hours to get to Jasper.  So we thought we would only lose 30 minutes. But it was such a beautiful day and we were happy to be in Tennessee….life is good, we’re thinking…. 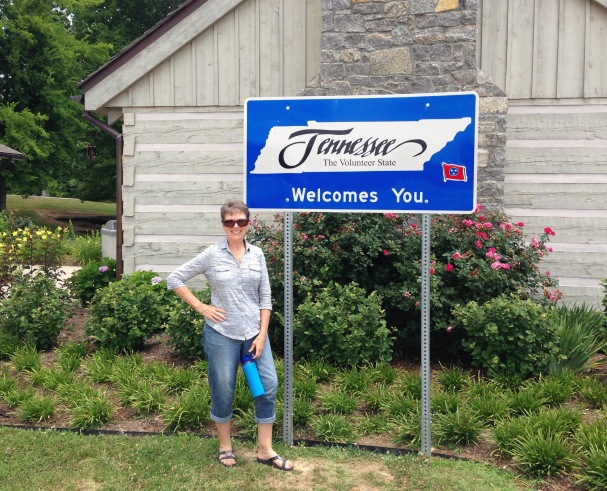 Bill was happy saying he now had 1,000 miles under his belt. That makes Debbie VERY happy!

Tennessee is a BEAUTIFUL state! Debbie couldn’t help but snap a few photos with her iPhone, driving safely of course…… 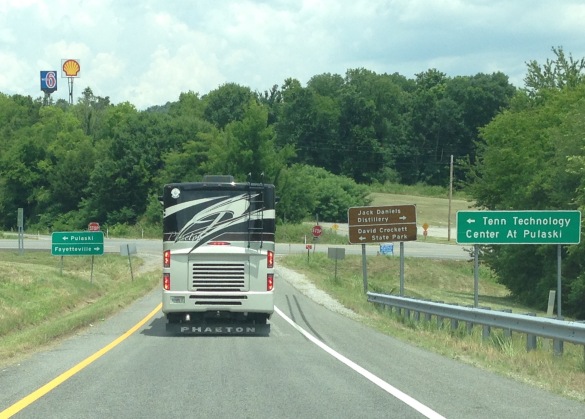 Debbie is thinking, “Look at all these sights we are just blowing by….but our grandson is calling our names….”

But then there was a detour off onto County Road 41 off of CR 65. We thought we were heading to I-24.  So long story short, it began to rain heavily and we’re lost in spite of our GPS systems and OnStar. Well, let’s say, Debbie was lost and Bill wanted to go one way but Debbie insisted on following OnStar’s suggestion. Fortunately, Debbie pulled into a good area for a quick conference call and a U-turn….while talking on the phone, Bill says, “Oh no, my wiper blade just fell off.” Did I mention it was raining heavily?

Oh no, my wiper blade just fell off!

Debbie is a woman of prayer. So as she pulled into this turn lane for the U-turn, there were only a few cars, then suddenly a lot of cars! So she pleaded with God for safety while Bill hopped out to put the blade back on (fortunately we had just stopped at the right time and place for it to land) and Debbie had to do the same – to take a picture. This was starting to get funny….to her….

And the trip just now got interesting. We’re not sure how it happened but we got on the type of road Bill said he’d NEVER drive on. One of those narrow county roads with lots of switch back curves, in the mountains with little to no berm and “cliff’s” on the other side of the road, with lots of pick up trucks in a hurry to go no where. And it’s raining….No pictures but it was scary and Debbie was in the small car!

But then, we got to the top of the hill and now it is a four lane highway…BUT and also 6% grades…AND runaway truck ramps, three of them! This is not good for Bill….and it’s back to white knuckles. 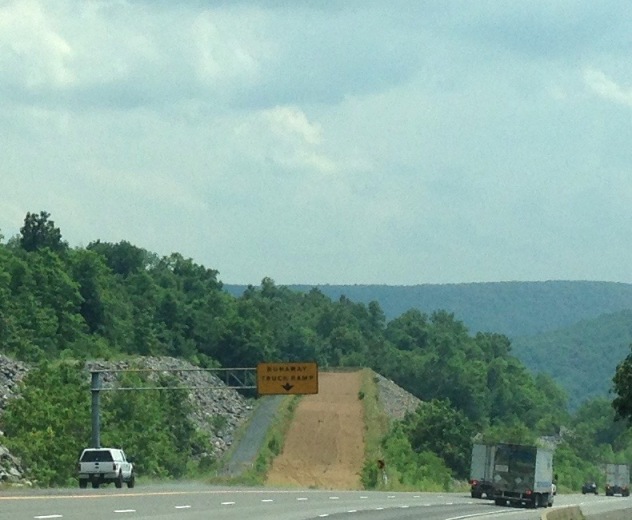 At least it’s not raining now!

This may be a bit long, so time to bring it to a close! Somehow, we found this quaint little county park, Marion County Lake and Park, right off of the Tennessee River! Our review here.

It only took us six hours, rather than the 3 1/2 we hoped it would be. So much for a relaxing and enjoyable afternoon. The sites were not clearly marked so we initially pulled into the wrong site. It wasn’t a real level site, so one tire didn’t quite touch the ground, but we had no choice and were just too stressed to try to re-park the motor home again. But somehow, we decided it was so beautiful, we had to take a walk around the park.

We were the only motor home. There were many trailers and 5th wheels near us and on the other side, lots of tenters. We had water and electricity. There was a dump station near the office. It was a nice of enough of a location to stay two nights…and we needed that time to “chill” out! 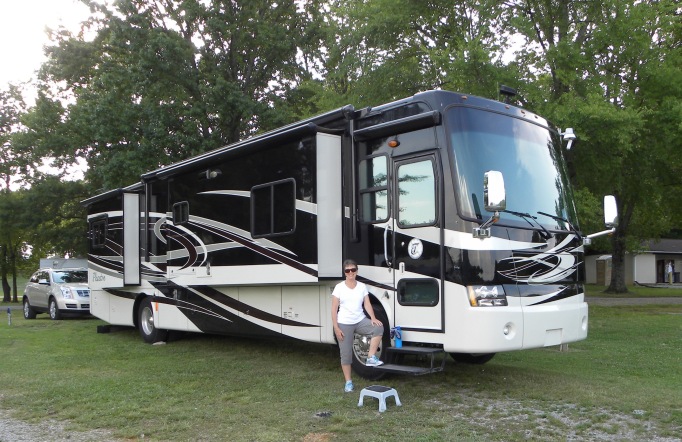 View from our RV

Another view. That bridge is I-24, going over the Tennessee River.

We walked over two miles, taking about 45 minutes walking time..

And then we met an interesting young man who just dedicated his life to Jesus – and who happened to be from Wyoming, near where Debbie was born. Not many people are from Wyoming….

Aspen said he never knew anything about Jesus. He was homeless at the time, just traveling with a tent and on his bicycle when he came to the know who Jesus is in Chattanooga. He was robbed twice there. Not that he had much, but his dad had given him a really nice tent. He said the Lord said He would be provided for, He just wants him to cross America and spread the news of His Gospel! So please pray for Aspen and his journey.

“The heart of man plans his way, but the LORD establishes his steps.”
Proverbs 16:9

After all this, Bill said he no longer has any doubts he can drive the motor home in just about any condition. But we really need to watch the weather.

Our second day there we took a great hike, nearly five miles, around Foster Falls! Photos for that are uploaded here, onto Flickr.

So guess how our next trip went? Heading to Bristol, Tennessee….

Getting Ready to Live the RV Retirement Dream