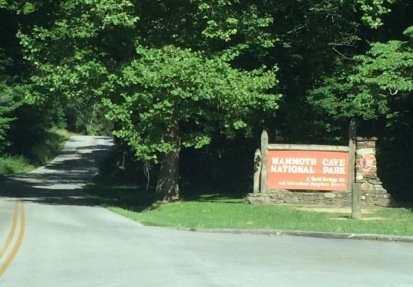 Finally, Bill got me here to see the world-famous Mammoth Cave National Park in south central Kentucky! I talked about our anticipation to visit here in our last post, Caves or Caverns.

We made our reservations to Cave Country RV Campground a week or so ahead since we knew this was the 4th of July holiday weekend.  We knew we couldn’t get into the campgrounds in the park, so we didn’t really explore them. Soon after we arrived, we decided to add a day on to our stay. We loved the warm welcome we received and all the brochures we were handed to help us make the most of our time here. There was so much to do in this area, but first, let’s check out Mammoth Cave National Park, which is part of the America the Beautiful pass program. Our tickets for the tours were half price!

It is a very well-managed and run Visitor’s Center. I’m sad I didn’t take pictures when we arrived. There were so many Park Rangers inside, to direct you and answer questions. Plus a nice “museum” are to fill your time while you waited for your tour time. History abounds!

A few facts:  This is one of the longest cave systems in the world and is one of the first tourist attractions in the United States. It achieved official park status from congress on July 1, 1941, and now encompasses 53,000 acres. We were here during it’s 75th anniversary. We’re not sure if that is why we saw such excellence on our first day here or if it just is always this way! Another hallmark was when it gained World Heritage designation on October 27, 1981 (guess that helps with the excellence) AND then became the core area of an International Biosphere Reserve on September 26, 1990.

A little history:  “Indigenous peoples lived and hunted in Kentucky between 2,000 and 5,000 years ago in the Late Archaic Period (2000 – 1000 B.C.).  These early explorers traveled miles within Mammoth Cave, using river cane touches to explore and collect the minerals and mirabilite, epsomite and gypsum. How they used these minerals is still a matter of speculation….lived in rock shelters or large cave entrances during parts of the year. Dry conditions in the cave have preserved vast quantities of artifacts, including some of the earliest evidence of organized agriculture in the eastern United States.”  More info in the next post.

We planned ahead and bought our tickets on-line to tour the cave the night before. That’s not how we normally operate, but we thought it being a holiday weekend, summer, and such a famous park, we thought it best. We went to the National Park Service website here to buy the tickets. We quickly noticed the times were going to be limited as we saw, “sold out” on several tours. We were glad we were planning ahead a little. Then we had to figure out which tour we wanted to take as there were so many selections, which change every season:

Needless to say, we were overwhelmed! We started reading about the tours and guess what? Each tour listed how many stairs you would have to climb, from 12 to 500! And only one had the 12 (with an optional additional 98), the Frozen Niagara Tour. So that was that, we could only do one of these amazing tours as I just can’t go up that many stairs. I can go down, but not up. I have knee problems only limited to walking up stairs-but I can hike up mountains….So that was such a huge bummer, but we decided it would still be worth it for us to see at least one, and we say how many hiking opportunities there were, 80 miles, we would enjoy it to the max!

Back to the Visitor Center. Since we already had our tickets, we were directed to the counter where they scanned the ticket confirmation emailed to me. We had to show our “America The Beautiful” Passes for the 50% discount as well as had to enter the pass number when we made the reservations. The tickets were $13. We were directed to wait in Pavilion B about 10 minutes before the tour, which began at 9:15 am. The later times, which we would have preferred were sold out! There was a small museum area that gave lots of history and was interactive. And Rangers were there to answer questions. The enthusiasm for what we were about to experience abounded!

Summer at Mammoth Cave is full of opportunities for adventure both above and below ground. The lush tree covered ridges and valley floors provide a perfect setting to enjoy approximately 70 miles of our nature trails. The Green River provides visitors a beautiful and peaceful setting to canoe or just slowly drift along its gentle current. Of course, there is also the Mammoth Cave itself. Its entrance exhales its cool breath on those who enter its realm providing not only a physical relief from hot summer days, but also the exhilaration of discovery!”

Our Ranger Tour Guide greeted us and gave us a few instructions. We would be taken to the cave entrance in a bus, about 15 minutes away. Upon arrival, he gave us a final briefing, saying we would have to bend over to squeeze through various places. We didn’t remember reading that, but we thought we were in shape, we could handle it.

In fact, the website says this tour is “Often the perfect taste of Mammoth Cave for visitors with very small children, elderly family members, or others who cannot walk long distances. Not sure you like close spaces? Have trouble walking or managing long staircases? This short visit through this very heavily decorated part of Mammoth Cave might be best for you.”  Let’s just say, we would like to add a caveat to this! One gentleman barely made it back to the bus after this relatively easy tour. Several children had a hard time being still and quiet when we were in the main area and the Ranger educating us with interesting facts and stories. There was a ledge, although rails, I just worried one would go over it. I’m not sure what age we would bring our grandsons back, but at least 8 or 9.  Later, I will explain more. 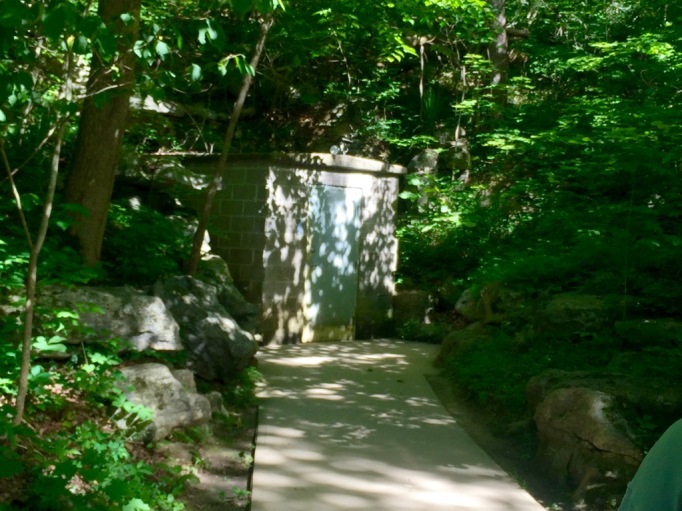 The entrance to Frozen Niagara Falls. 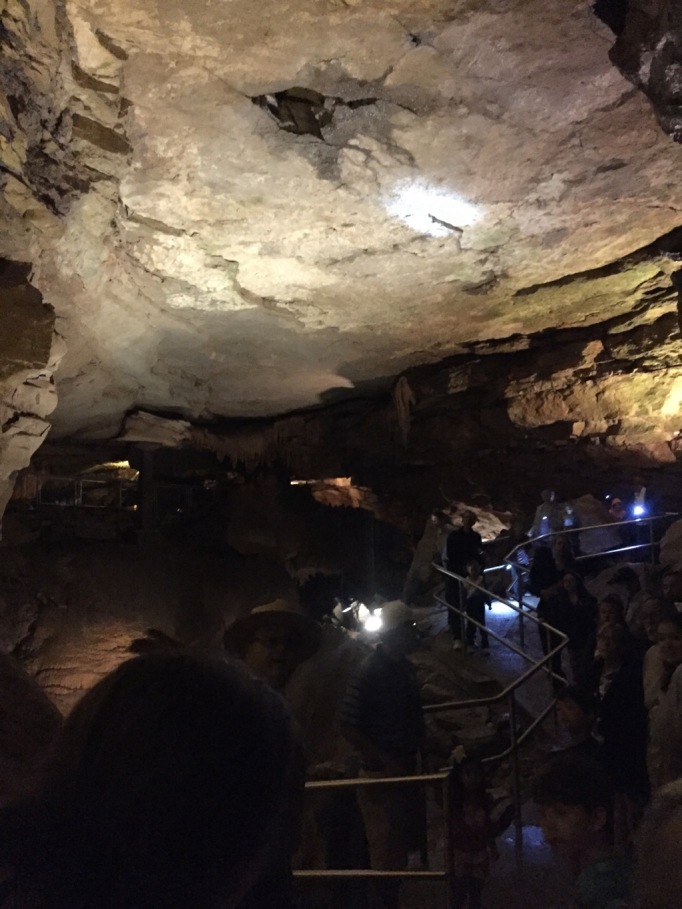 This is where the Frozen Niagara Falls area is and we all were clustered around this area. I took this picture to show the slow drip in the “ceiling” that goes down into the Frozen Niagara where the optional 98 steps take you. Note the rails. The Ranger did say if you have children to keep them close to you!

This shows the entrance to the optional 98 steps down to see the “falls” up close and personal!

We learned so much from the Ranger.  One thing is how it they named this one, and all the other caves not in this park. “Back in the day” they had to come up with ways to entice people to see these caves, so they named them after things that “reminded” you of something else – and in this case, it looked like Frozen Niagara Falls. But there was no ice! In fact, it wasn’t that cold inside, about 60 degrees. It was in the mid to high 90s outside so it felt good.  Other caves in the area are named for various gem stones, only because they sort of looked like them!

What was most fascinating is that this Park is home to the world’s longest known cave system, with more than 400 miles explored. To answer one young man’s question, the cave doesn’t “stretch” from state to state, it is more like a spaghetti bowl! And the exploring is on going.  It was hard to believe, but approximately 130 animal species use the cave on a regular basis. We didn’t see anything while we were inside, thankfully! But they were there!

When we entered the cave, we were some of the first in, so that meant last out. We didn’t really mind the walk in, where we did have to stoop over, but it became a bit problematic on the way out. We were asked to not take pictures on the way in, but on the way out. There were so interesting sights on the way in, but I couldn’t get them on the way back out. As we started walking out, with just a few people behind us, the adults were taking pictures and the children wanted to linger and look for some of the animals and sights. We ended getting “stuck” in the bent over position in a narrow “tunnel” which felt like forever, but maybe 10 to 15 minutes. So as soon as we could stand up, we weren’t too interested in the pictures and forgot what he had said about the sights!

We were disappointed? Compared to our other cave and cavern tours, we were a little disappointed but maybe it was because we are older and I couldn’t go other ones because of the steps. So we won’t say anything to discourage others. We know there is much to see and do around here, so we’re heading out for some exploring of the 80 miles of hiking trails and to learn more history of the area. We spent the rest of the day enjoying “Porch Talk” with a Ranger, about 45 minutes long, walked down to the Historic Entrance and then to the River Styx Spring Trail to the Green River, saw the historic cemetery while on the Heritage Tour and became friends with a few other couples we hope to see again!

The rest of our time here, we will tell you more about Bowling Green, home of the famous Corvette Museum; a tour of the Shaker Village; an 8 mile hike; a visit to Glasgow; more Civil War History; history of the rail road in Kentucky, with these details starting here.

We did enjoy the tour. Here we are smiling. It is invigorating looking inside the earth!

A joyful heart is good medicine, but a crushed spirit dries up the bones. Proverbs 17:22

A Poet in an Abandoned Library