Hopefully, you can tell we made the best of the 21 days we spent in Lakeland, Florida while getting our RV repaired. And to think for 10 years we only lived 30 miles from here and never knew of these fascinating hiking areas as discussed in our last post.

This post is about the one hike we took on Friday, February 19, 2016, in Lake Wales. It was nothing like any hike we’ve ever done! It’s the Allen David Broussard Catfish Creek Preserve State Park. We looked on the official State Park website and were only able to determine it was an 8,000 acres preserve with six miles of mostly white sandy hiking trails. I wondered who the person was that it was named after, it was not mentioned. All we knew after seeing this picture was it was a place we had to visit:

When we do research to find local hikes, we like to read about the area, get an idea about the trails and just be prepared. But we didn’t see much about it on the Florida State Park website, nor did we see any thing about the trails, other than it has white sandy trails in the open, take plenty water, use sunscreen and wear hats! 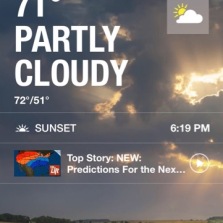 It was actually mostly sunny! 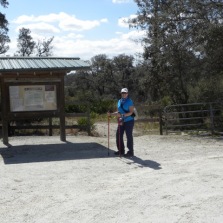 Trail head also had very little information about the trails.

This was how the trail started. We had no idea what was ahead!

We thought this would be a faith walk, having no idea how it would be marked and how lost could we get, anyway? I use a GPS tracker (Map My Walk app) so we always know how to find our way back to where we started – if we get lost. So far, we’ve only needed it to get us back on the right trail! 😁 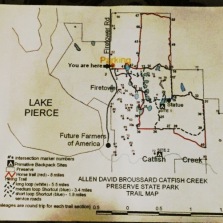 Yay, now we know how the trail will be marked and what our route will be.

Our actual route with Map My Walk tracker

What a relief as we really do want to have a plan when we hike. It’s really wise to know what you are getting into, but then, we didn’t really know what we were getting into!  Once we found the trail map, we saw there were three choices to hike: a short loop, about 1.9 miles, a medium loop, about 3.4 miles and then the long loop, 5.5 miles. The equestrian trail was marked with red and was 8 miles. Of course, we almost always take the long hiking trail, but didn’t want to be on the equestrian trail. All we had to do was follow the white markers, which were coupled with the red markers to start off.   Yep, this is also horse friendly! We never saw a horse, but did see evidence one had been in the parking lot after our return.

This is the only wildlife we were able to capture with our camera and enjoy. Such a beauty! 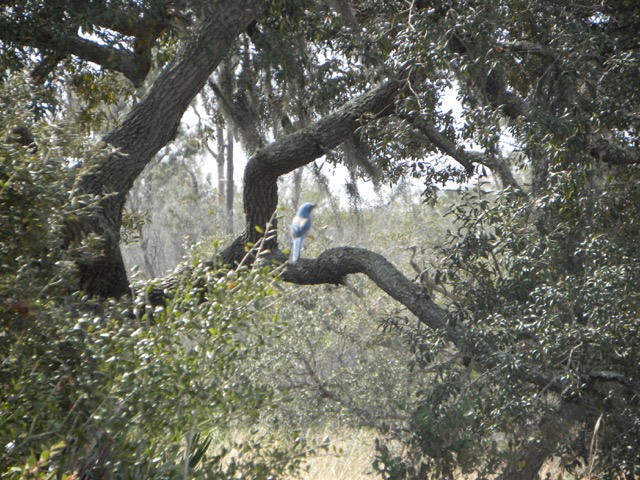 We watched this sweet heart of a bird for some time. But never could get it to look at us! “A bold and curious bird, the Florida Scrub-Jay can become hand-tame in areas where it comes in contact with people. Unfortunately, it is restricted to the rare oak scrub community of Florida, a habitat under constant threat of development, and is classified as Threatened under the Endangered Species Act.” Info from https://www.allaboutbirds.org/guide/Florida_Scrub-Jay/id

We only saw two couples on the trail, but also four rangers in three vehicles  monitoring the controlled burns. I’m so sorry I didn’t snap a picture of them as it was a convoy! Thankfully, all the fires were out. We talked with the one couple for a while as the rangers drove by. They were from Minnesota and in the area for only a week. They are “caregivers” for an elderly parent, so this was their week of respite.  They didn’t look dressed to hike, but like us, love the outdoors. They intended to only walk a mile but agreed it was so beautiful, they went farther. They said they made it to the statute, but made no other comment, other than it was a statue. I was hoping to see it, but wondered if it was of the person who the park was named for. They were excited as they saw a large buck, but that was it. We had hoped to see the buck, too, but we were fortunate to see a few beautiful scrub jays.

We were really enjoying the beautiful preserve, but there was no doubt, it was a strenuous walk in the soft sand with the sun beating down on us. And it is on the Lake Wales Ridge, so there were some challenging “hills.” We had stopped for lunch right after walking around the pond. It was so serene and we knew there had to be other hikers or at least fishermen in the area as there were two cars parked in the parking area. Which was very nice, by the way. With a bathroom and a covered picnic table. 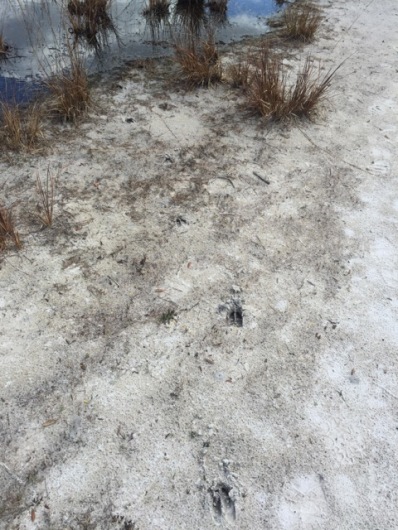 While we never saw the buck, we found his prints. He was a good-sized one!

We did have to reference our map as sometimes it was unclear which direction to go. I knew I wanted to see the statue. As we approached the trail to it, we realized it would take us out-of-the-way of the trail we were on. But then, we never mind adding a little to our hikes. So up a hill we went to see it! And this was a hill!

Wildlife Biologist, Ecologist, a birder with few peers. Allen had remarkable insight into the workings of nature. Intelligent and innovative, he took a practical approach to problem solving. He was friendly and unassuming. Careless of creature comforts, smiling and non-confrontational. Beloved by family and associates. His death is a great loss to all living things. – Father

As we approached it, we only saw the backside was actually rather grim, so I didn’t even take a full picture. But we both became overwhelmed as we began to read all the quotes around it….and then we were just amazed as we saw the front:

1961-1990. “We are experiencing a period above – average extinction rate because there are very few if any ecosystems on or planet that are not affected or destroyed by man’s activities. It seems unlikely that our own species is not responsible for this accelerated extinction….Allen David Broussard

Oh my! This YOUNG man was only 29! And when you see the front, you see what a handsome, curly-headed young man he was. With a bird perched on his shoulder. We just hung out there in awe of him, wondering, what was the rest of the story?

Quote from his mother and sisters. 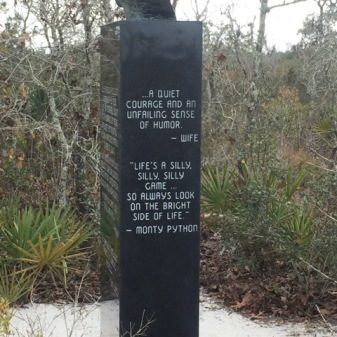 Quote from his wife and Monty Python!

This park immediately began to take on a new meaning to us! We knew this young man had to be something special. We just couldn’t believe the other couple didn’t say anything about it when we asked. Maybe they didn’t get close enough to read the quotes? We knew we were impacted.  Then on we went, knowing we were only about 1/2 way through the trail….still thinking about him…. 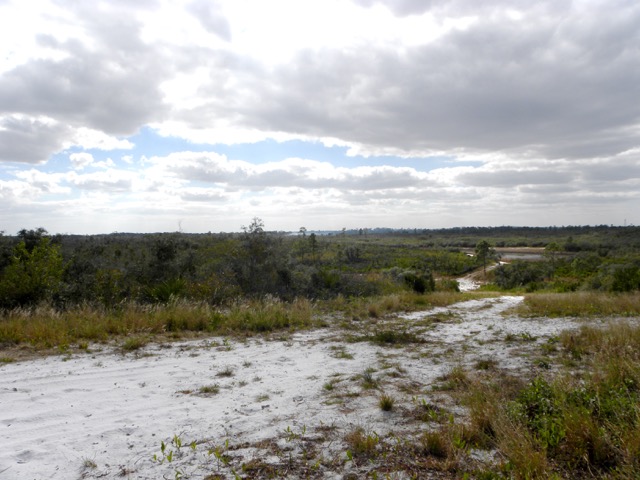 View from the top of the ridge!

With only about a mile to go, we reached the highest point in the preserve. And we deserved a break! This hike was undoubtedly one of the most strenuous we have ever done. So as we sat and took in the beauty of it, I was still shaken by the life of this young man. So of course, I had to “google” his name and found The Allen Broussard Conservancy which tells his story. Please visit the site to learn more. But in summary, this young man went on with his education after fighting Hodgkin’s Lymphoma at age 19. He Began to make a name for himself in his research and studies.  But the chemo and radiation ultimately damaged his heart. In spite of his health issues, he went on to do great things and was married. It was his dying wish to his dad to help save the land. And thus, this preserve and the conservancy were named after him…..

Pretty touching isn’t it? I can’t help stop thinking about him and his life….

Next up, Can you believe we are back in Myrtle Beach….

Our small family living in a 5th wheel following Dads work as a rock fall technician... what could go wrong?

A Summer in Togo