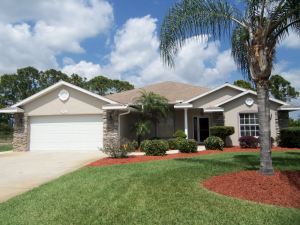 Our Florida dream pool home. Easy to sell when we had a new purpose in life!

In July 2014, we sold, gave away or donated nearly everything, the Harley, my beautiful car, our gorgeous Florida pool home, our treadmill (I said I’d never sell it), sold many household furnishings and gave the rest away!

WHAT? Why would we do this? Funny, as I write this, we both did this in the early 1970’s, before we were married. I lived in Norfolk, Virginia and Bill was living in Jacksonville, Florida at the time when we each joined a street witnessing, an evangelistic ministry. When you joined, you were called to “sell all.” But all our proceeds were to go into the furtherance of the ministry. This was based upon Acts 2:44-45, where the new believers in the resurrected Jesus Christ were together and had everything in common and sold their property and possessions to give to anyone that had a need. We meet in this ministry, but eventually left it and got married. Our life thereafter is talked about in the other part of this blog, Chapter 2, “Why share about our marriage?”

But this time, we sold everything to become full time RVers, where we can travel and see the country but more importantly, so we can easily spend time with our grandson, who lived 800 miles from us in Florida!

So we are asked many questions about this and we also asked many other full-time RVers about the transition from homeowners to full-timers. I’ll try to address these:

1)  What made you want to do this? It wasn’t something we wanted to do, believe it or not! It just happened, but we were guided by a desire to travel and be closer to our grandsons. And how it all came together, we have to give God the glory as it was nothing short of miraculous!

2)  How did it start? This happened in stages! Bill had a desire to travel in a Class A, one of those big bus-like rigs, usually pulling a car. He actually looked at them on the internet for 3 years and we went to a number of RVs shows to see inside. We looked at them all, from $100,000 to $500,000! We loved the $500,000 but never thought that was even a possibility and when it came down to it, the $100,000 ones weren’t even in our price range! But it wasn’t until the baby was about to be born, in August 2013, that we got serious and began to look as buyers, not window shoppers. The biggest push was that our daughter lived in a small home and had converted the guest bedroom into the nursery. It only had a bath and a half, so not conducive to our son-in-law having the in-laws staying very long! We didn’t want the baby in day care at 2 months old, so I said I’d watch him for an additional 30 days. But where to “live” while up there? So we decided it was time to buy the RV. We looked for about 30 days and in frustration about gave up! We had decided a used one was the way to go, but as I interviewed those owners, they only needed the “balance” of the loan as their price, which was always way over our $50,000 price (which to me was still way to high). That began to tell us that the Class A was not the way to go as we had just paid off everything – including our mortgages as we owned several rental properties as well (in August 2013 coincidently – or are there coincidences?

Bill also had started listening to Dave Ramsey in January 2013 and he made sense about living debt free. We went up to Virginia for the baby’s birth, stayed in a hotel for 2 weeks, then returned home to Florida. The clock was ticking! We decided to go to ONE more RV show, it was just a small one, but what did we have to lose? I should mention, I had tried to get Bill to look more seriously at a toy hauler for his motor cycle, but he just didn’t want to haul a garage, which in essence they have. I had also thought a 5th wheel was a good alternative, but our Toyota Tacoma was too small to tow it (we had looked at small trailers to pull, but that never seemed to work for a man 6’2”). Bill really didn’t want to spend $50,000 on a new truck – which was what he thought we would need to pull one. Long story short, we walked into a 5th wheel at the show and it wowed us! But we began to think logistically it wouldn’t work for us until a man walked in and said, “can you believe an F150 Ford Ecoboost could haul this?” We had just parked next to one and the new owner proudly showed it off saying he was here to look for a trailer (or maybe he said 5th wheel). It was impressive and the wheels began to turn! Was this the answer? As it turned out, it was and it was and now over Labor Day when things were on sale! Bottom line, we got a great deal on the 5th Wheel and we traded our Tacoma in at a great price, also getting a GREAT deal on the truck – all for under $50,000 and we didn’t have to take out a mortgage!

3)  How did you decide to go full time? We didn’t set out to go full time or we may have bought more and bigger! But we had started becoming minimalists and we are not shoppers – in fact, we hate shopping and spending money! Right after we bought it, we took two very short trips in it and felt comfortable before we set out for the big trip to Virginia and the goal to live in it at least 30 days in one place. We left our home October 4 and by the time we returned, December 1 and had 64 nights under us, we said we knew we could live in it full time!

4)  What about your Harley? Bill wanted a motorcycle starting at the age of 6 – he distinctly remembered seeing his first one and daydreamed about it until he graduated from high school when he finally bought his first one! He loved it and was a natural rider, even survived his first wreck with minimal damage! Then he joined the ministry and sold his then third one to a friend for a real steal, $1,000. Sadly, the friend gave him a bad check, but that is another story. I was shocked after we returned home on January 10, 2014, after several weeks back up to Fredericksburg, when he commented he might as well sell it! We began to think seriously about going full time and the motor cycle just wouldn’t fit the lifestyle. So we casually mentioned selling it to a young pastor at a community event. He said he needed a bigger one and planned to buy one in the fall. We thought that would be about our time line….As it turned it, Bill was ready to sell it when we returned from our last trip, in May. We reached out to the pastor and he bought it right away. We really thought we’d take a motorcycle trip in May, but we could see, we preferred the RV lifestyle!

5)  How long did you plan to live this way? Initially, we guessed 3 – 5 years. When we bought our motorhome, we committed to 10 years. Sadly, we only lasted 7 1/4 years. We knew we really like it and when we went “home” to Sebring, something had broken (like our sprinkler system) and maintenance was always needed. As we began to travel, we did have to have an “end” plan in mind as we learned at a seminar at the Tampa RV Super Show. We just didn’t know where – so as we traveled, we always asked ourselves, is this where we could settle down?

6)  What about church? If you are familiar with our testimony, you know how important it is to belong to a church. In a nutshell, here it is again (I love to tell the story): We meet in a ministry, left it and married. We couldn’t agree on a church to attend after we married so we slowly stopped going, saying we were having our own church on Sunday that became nothing about God and all about us. After 13 years, we divorced. I attribute it to the fact that we had left the Lord – He was too important to me to keep running from, and Bill just couldn’t stop running. After the divorce, Bill ran to God and I immersed myself into Him! So what do you expect? We forgave each other, reconciled and remarried! We found out how important a relationship is to a church – not that the “church” does anything, but it is the relationship to the Lord that grows when you are with like-minded believers! You pray for one another, you hold one another accountable, you have a consistent growth pattern by the sermons and Sunday School, but most importantly, at least once a week, you participate in corporate worship of our Lord and Savior! Since we remarried going on 25 years ago (August 19, 1989), we have moved 3 times so each time we sought out a church to join and then became involved in the ministries where our gifts and talents were. So now what since we are transients? We make it a point to attend church each Sunday, with the exception when we have to travel on a Sunday – which is not our preference. So we visit a lot of different churches as we travel and we have found it to be enriching. We pray each morning, but on Sunday mornings, we pray especially for the upcoming church service, for God to speak clearly to us and for our worship to be pleasing to Him!  And an interesting side note:  The last sermon we heard in Sebring was from the Book of Ecclesiastes, where the wisest man to live said in the end, all is vanity or is meaningless and in the end, to remember your Creator and to fear God and keep His commandments!  And that is our new perspective and we especially thank God for the creation of our precious grandson!

So our first trip out was to head up to Fredericksburg to help our daughter and son-in-law settle into their new larger home.  They now will have a guest room, but we really prefer our own home on wheels. Our first night there, we finally had our first sleepover with Colin!  He was so good for us and we even got to sleep in…which our daughter can’t understand since he never sleeps in on her day off.  And it was also his 11th month birthday so what a way to celebrate! 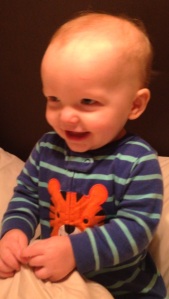 Colin at 11 months and his first sleepover!  He wakes up HAPPY!

Here is our final travel blog and where we ended up.