We are here, in Cave City, Kentucky

Bill doesn’t remember traveling very much with his family, except every summer, his family went to the Jersey Shore. But he remembers visiting Mammoth Caves in Kentucky with his parents and an Aunt when he was 18 or so. The caves left a great impression on him. Every time we visit caverns, he says he can’t wait to bring me here – and we are finally here! This is the fourth cave system we have visited in our marriage. So before we talk about the Mammoth Caves, let’s figure out the difference between caves and caverns and then look back at our previous three caves or were they caverns?

First, while on our tour here, the Park Ranger was asked, “What’s the difference between caves and caverns?” He said the spelling! Love a great sense of humor. He then added, technically, you should be lowered into caverns but you can walk into a cave. Well, we visited the Luray Caverns and we weren’t lowered in so let’s ask Merriam-Webster:

That didn’t help much! Let’s ask the experts at Cavern.com, where they have a great lesson plan:

Is there a difference between a cave and a cavern? This is a frequently asked question, and many people use the terms interchangeably. However, there is a difference. A cave is any cavity in the ground that is large enough that some portion of it will not receive direct sunlight. There are many types of caves…. A cavern is a specific type of cave, naturally formed in soluble rock with the ability to grow speleothems. So, although a cavern can accurately be called a cave (since it is a type of cave), all caves cannot be called caverns.

Hope that clears it up for you. 😁 Now let’s look at our previous visits to caverns, or were they caves?

Taking off from our home in on our Ultra Classic Harley, in Florida to celebrate our 36th anniversary, April 2011.

The first one we visited in July, 2001, was when I took Bill on a surprise weekend motorcycle trip to Luray Caverns, located in Virginia. Our daughter was living on her own and I was now doing more international traveling with my job. We also had Bill’s dream, a Dyna Wide Glide Harley Davidson. (Sorry I don’t have a picture of it, just of us on his last Harley.) I had just returned from Islamabad, Pakistan. Bill thought I would be exhausted from the trip, so he didn’t make any plans. Little did he know, international travel energizes me!

I got back a little early, enough time to pack our bags on the motorcycle. He came home and I just told him to put on his riding gear, we were going away.  No arguments, then we hopped on it and headed west. He had no idea where we were going. I just said go west. I’m not real good with directions but somehow, I got him on the right road. I asked him if he had any idea where we were going by now….then he saw a billboard for Luray Caverns. He guessed it and was so happy! But I didn’t have time to research or even make hotel reservations, we were just going to wing it. To make a long story short, we found a quaint little hotel and had one of the best weekends ever! Sadly, this was before we started taking digital pictures. We have photos, but they are now in a box with 1,000s of other photos, waiting to be scanned and digitized. 😞  While we were mesmerized by the tour of the caverns, Bill mentioned Mammoth Caves. He said I have to see them! 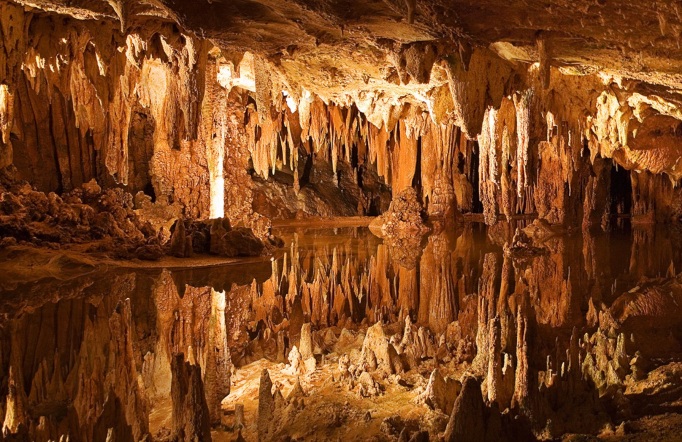 Next, we toured the Shenandoah Caverns in our 5th wheel in May 2014, which is linked to our post here. The third slide show is of the caverns. At least we are now into the digitalized age! Our visit here was coupled with lots of hiking in the Shenandoah National Park – our favorite place to hike! Here is a picture that shows our group going down a bit and squeezing into a cavern. Again, Bill mentioned Mammoth Caves, I had to see them!

Photo I took as our group went down into a cavern.

Did you know there are caverns in Florida?  Please look at the pictures we posted from our first experience camping in a State Park, The Florida Caverns State Park. Needless to say, we got hooked and even discovered our 40′ motor home will fit in some state and national parks!

And finally, our most recent tour of the Raccoon Mountain Caverns in Chattanooga, Tennessee last month. You can read the full post here.  Again, they were pretty amazing.  Did I mention that Bill said I have to see Mammoth Caves?

On our way to the Crystal Palace Tour. Look similar to Shenandoah Caverns, but they are very different.

Up next, we will finally visit Mammoth Cave National Park and see what I think! How does it compare to these other adventures? Has anyone visited these or any other caves and caverns? How did you like them? There are so many around the United States!

People will flee to caves in the rocks and to holes in the ground from the fearful presence of the LORD and the splendor of his majesty, when he rises to shake the earth. Jeremiah 49:16

2 thoughts on “Caves or Caverns?”