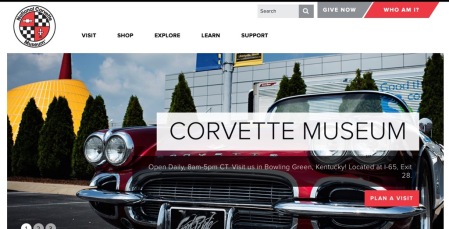 It took three posts to really capture the essence of why we came to this area. But there was one other reason Bill picked this area. Can you guess?

What I hoped to do was lots of hiking. But it ended up raining so much, we had to find some indoor things to do. Can you believe the Mammoth Cave National Park has 84 miles of trails! These trails are not just for hiking but some are designated for bikes and horses. There is also canoeing and kayaking at this park. We only got in one day of hiking, but it was 8 miles! And it was a glorious trail.  Click here to read more about the trails and view maps. National Corvette Museum.  Bill toured this by himself. I’ve never really cared about cars, but after hearing him talk, now I wish I had gone inside! He said this is one of the best museums he has ever visited. And we have visited a lot of them. He said it was the presentation of the entire history of the corvette. Sadly, he also wanted to take a tour of the actual plant to watch them build a Corvette. I would have watched that, but they were closed for two weeks for production changes. Good for the employees, but bad for Bill and a few other men he talked to who also wanted to see the plant. What was most astonishing to Bill was about the sink hole that swallowed up a new display of Corvettes!

Two years ago, on February 12, 2014, many people across the globe woke up to some startling news – a sinkhole had opened up inside the National Corvette Museum in Bowling Green, Kentucky, and eight Corvettes were laying at the bottom of it. Fortunately, the cars and building were the only things damaged as it occurred in the early morning hours before anyone was in the Museum. The story captivated those who watched it, and while the Museum initially planned to put the past behind them, the interest in the sinkhole and damaged Corvettes was undeniable.” Please click here to learn about this fascinating display.

Here is what else I found the interesting from the website, and it made me wish I had gone inside.

The Corvette has been produced for seven generations over the past 63 years. Known throughout the world as “America’s Sports Car,” the Corvette embodies the concept of innovation. On June 30, 1953, the first Corvette came off the assembly line. In 2008, the United States House of Representatives passed a resolution that June 30th would annually be known as “National Corvette Day.” That’s right, a whole day devoted to America’s sports car.

Below is the actual text from the resolution.

To help mark this year’s “National Corvette Day” click here if you would like to see the brief history of the Corvette. Scroll down below the above resolution.

We decided to prioritize what we would see and do while in this area. The Cave Tour was #1 and the Corvette Museum was #2. Then hiking. Day one of our eight days here was devoted to the Visitor Center and cave tour as discussed in the last two posts. If you missed them, click here and here. Believe it or not, Bill was done with the museum so early, we decided to see one thing that Bill thought would be interesting. I didn’t know much about the Shakers, so it interested me, too. It wasn’t too far from Bowling Green, so off we went for the afternoon.

South Union Shaker Village (1807-1922).  One thing we like to do as we travel is to learn unusual history and to honor those whose lives are memorialized in museums, in parks, gardens, and even cemeteries. This was a fascinating place to visit and for us, it was well worth the meager $8 it cost to see it.  We entered the visitor center to pay and watched an interesting and brief (I think 15 minutes) video that gave us a good overview about the Shakers.  There were a few things on display in this quaint Visitor Center and then you were given this map to take a self guided tour.  The Docent pointed out the actual “museum” in the 1824 Centre House and Gift Shop.  I clocked all of our walking, which went beyond this map to about two miles. There were markers explaining many additional buildings. For more information, please visit their website, here, and try to visit yourself.

South Union Shaker Village map for self guided tour of the grounds.

In the gift shop area, they have “Shaker Journal’s” for sale. I’d love to have bought them, but since we don’t carry anything extra in our new lifestyle, I couldn’t buy one. One fact that was so interesting was that they embraced all new ideas and technology! Hopefully, these journals will be on-line one day.  Here are a few statements in the “Introduction” of one journal I found to be profound about the Shakers:

The history of the Shakers has been preserved primarily because of the record keeping methods they practiced. Daily activities in all Shaker villages were meticulously recorded by leaders and members alike, creating a body of primary source that has become invaluable to the researcher. Many journals, diaries, letters and hymnals have been lost, but those manuscripts that have survived offer a fascinating glimpse into the worship experiences, financial endeavors, work processes, and personal thought of the longest lived communal experiment in American history.”

Ann Lee, a woman who decided procreation was not necessarily of the Lord (she lost four babies/small children) and some followers arrived in America in 1774. Continuing in the “Introduction” of the Shaker’s Journal:

They choose to live celibate lives in a communal environment that emphasized withdrawal from the “world,” simplicity in all things, and a unique worship practice that included dancing. The Shakers sought perfection in all aspects of their lives and used this philosophy to create a material culture that is today revered as on of the finest in our country’s history.

South Union, Kentucky, was one of the twenty-fou villages established by the Shakers during the 18th and 19th centuries. Settled in 1807, South Union eventually encompassed 6,000 acres of land and was surrounded by over 200 buildings. During the first half of the 19th century the community achieved great prosperity, reaching its peak level of spiritual growth and economic development. Financial difficulties and the lack of new dedicated converts caused a decline in the community after the Civil War, eventually forcing its closing in 1922.”

To be honest, the one thing I did know, or remembered from history class, was that the Shakers were excellent workers/builders. So from the website, here is an interesting tidbit, and it is relevant as we think about seeing the Corvette Museum the same day we toured this village! Yes, there are similarities between the Corvette and the Shakers!

The architecture of the Shakers is fascinating. It is famed for its structural purity and simple, eloquent beauty of line. The Shaker master builders, carpenters, masons, stone cutters, bricklayers, lumber workers and blacksmiths here at South Union designed and built all of the Shaker buildings on-site. The exterior of all buildings are plain and well-proportioned. A visit to the original buildings remaining today allows one to view the astonishing craftsmanship and structural integrity of the Shakers, reflecting the lives of the people who lived and worked in them, and giving those who visit a great spiritual feeling of peace.

We would recommend visiting this village. Check out their “events” as they do have a variety of public events. I took a few pictures outside (no inside pictures allowed) so here is a slide show if you are interested:

So we had to synthesize these two different worlds, the Shakers from 1807 to 1922 to the Corvette, from 1953 to the present.  Since I’m not really into cars, I have to take Bill’s word for it. He is a “car guy” but specializes in his appreciation for classic cars. What is similar is the excellence of craftsmanship and work ethic.  For example, the buildings and materials are in great condition in spite of their age, 150 yrs old; furniture, inside the “museum” is so sturdy and well made, the wooden stairs in the actual museum, have been well used, are still in excellent shape. At one time, the building was used as a boys school. Similarly, many old corvettes (classics) have lovingly been maintained or restored. And the brand is 63 years old, somewhat rare today.

Bill’s thought was that anytime people can freely pursue passions, excellence is the result. And he saw that clearly in the Corvette museum and at the Shaker Village. Over time, the corvette is one of the best American made cars. It’s fit and finish is unparalleled, just keeps getting better. He could see excellence in its manufacturing and the history of how the Corvette almost failed. Like the Shakers products (for example brooms and seeds they sold) and the Corvette manufacturers thought outside the box: they listened to “consumers” and worked to perfect their “products.”  The Shakers embraced change and improvement in “technology” if you want to think about the cisterns, etc., as with the Corvette. Bottom line, some of the best technology from each world is still in use today!

Now for the sad news. As excellent as the Shakers were in all the work they did, they were told to work as if what they were doing would last 1,000 years, they missed the mark in one area. Who knows if anyone ever suggested they broaden their stance on being celibate, but just like the corvette almost became extinct because of “tradition,” the Shakers did become extinct.

This ended our Day 2. We just have a little more to report: a trip to Glasgow, Kentucky where we toured a Civil War Fort that overlooks a cemetery and then back to Bowling Green to take a tour of the Railroad Museum along with our 8 mile hike back at Mammoth Cave, and a few pictures from the immaculate RV Campground. The final post will be next! We’re actually now in London, Kentucky, so I have to finish this and start writing about our current adventures.

Whatever you do, work heartily, as for the Lord and not for men…Colossians 3:23

One thought on “Bowling Green, Day 2 (near Mammoth Cave)”