Confederate Trenches: the State Park has preserved this elaborate system of earthworks dug by Confederate soldiers.  It was not hard to imagine how hot and steamy the job was for these men as they dug the trenches. One soldier wrote home, he thought he would melt!

While Bill and I are students of history, our favorite way to learn is up close and personal! We didn’t discover our common affinity for history until we moved to Fredericksburg, Virginia, in 1996. We not only went into Washington D. C. to visit the museums, we also set out to visit nearly every nearby battlefield, and Virginia has its share of them. We really enjoyed the few times we were able to listen to a National Park Ranger give an oral history report.

In the Columbus Belmont State Park, they have great signage as you take your own self guided tour, which is complimented by the Museum and 8-minute video presentation.

The Kentuckians we met around this park were proud of their heritage, especially Columbus.  It was originally called Iron Banks due to the deposits of iron ore in the bluffs along the river.  The settlement eventually changed its name to Columbus and attempted to have the U.S. capital moved from Washington to western Kentucky after Washington D.C. had been burned by the British during the War of 1812. The nation’s capital stayed in Washington, but Columbus did grow to be an important river town.

The battle was here on November 7, 1861, although Columbus was taken over by the Confederate States Army (CSA) on September 4, 1861. This is one of my favorite signs as it really explains the importance of the battle held in this now preserved historic State Park.

The Generals of the Columbus-Belmont Civil War Battle: “The Fighting Bishop’ CSA General Leonidas Polk was a West Pointer, the Episcopal of Louisiana, a wealthy Tennessee planter, and a friend of Jefferson Davis. He was a pious and kindly man, loved by his soldiers, but he was basically an incompetent general. Polk had the added fault of hating to take orders. In September 1861 Polk broke Kentucky’s neutrality by the occupation of the small Mississippi River port of Columbus. Polk made Columbus strong by leaving everywhere else weak. Defensively minded, he only waited to be attacked. After the much weather Forts Henry and Donelson east of him fell. Polk and the Confederacy had to abandon Columbus.   Union General Ulysses S. Grand was the son of a tanner, a West Pointer, and a Mexican War veteran. He was the general who eventually became commander of all the armies of the United States. He was known as ‘Unconditional Surrender’ Grant. Fearless, offensively minded, Grant made mistakes, learned from them, and pushed forward. The Battle of Belmont was Grant’s first battle and the beginning of the Vicksburg Campaign. In 1869, Grant became the 18th President of the United States.”

Civil War Background: In the mid-19th century, while the United States was experiencing an era of tremendous growth, a fundamental economic difference existed between the country’s northern and southern regions. While in the North, manufacturing and industry was well established, and agriculture was mostly limited to small-scale farms, the South’s economy was based on a system of large-scale farming that depended on the labor of black slaves to grow certain crops, especially cotton and tobacco. Growing abolitionist sentiment in the North after the 1830s and northern opposition to slavery’s extension into the new western territories led many southerners to fear that the existence of slavery in america–and thus the backbone of their economy–was in danger. In the spring of 1861, decades of simmering tensions between the northern and southern United States over issues including states’ rights versus federal authority, westward expansion and slavery exploded into the American Civil War (1861-65).

The election of the anti-slavery Republican Abraham Lincoln as president in 1860 caused seven southern states (South Carolina, Mississippi, Florida, Alabama, Georgia, Louisiana and Texas) secede from the Union to form the Confederate States of America; four more joined them after the first shots of the Civil War were fired. Four years of brutal conflict were marked by historic battles at Bull Run (Manassas), Antietam, Chancellorsville, Gettysburg and Vicksburg, among others. The War Between the States, as the Civil War was also known, pitted neighbor against neighbor and in some cases, brother against brother. By the time it ended in Confederate surrender in 1865, the Civil War proved to be the costliest war ever fought on American soil, with some 620,000 of 2.4 million soldiers killed, millions more injured and the population and territory of the South devastated.

The war began after the confederates fired upon and captured Fort Sumter on April 12, 1861 with the war ending May 9, 1865. Another new fact I learned (or now put into perspective) was the Civil War consisted of nearly 10,500 battles, engagements, and other military actions including nearly 50 major battles and about 100 others that had major significance. The remainders were skirmishes, reconnaissances, naval engagements, sieges, bombardments, etc. WOW, no wonder there is so much to learn about the Civil War.

The Union sent troops to Cairo, Illinois, soon after Fort Sumpter was captured.  This was an obvious location to launch a campaign down the Mississippi River.  And in doing so, Lincoln was hoping to lure as many of the yet undecided states into the Union fold. He was a brilliant man as it worked, but I’m not sure he thought it would work out the way it did.

For the Confederates, Columbus was an ideal place to halt the Union invasion along the Mississippi River. In addition to its high bluffs and the strategic location, it also had a railroad line. Transportation and the ability to obtain not only supplies, but to move troops was imperative to each side. The CSA had 19,000 men laboring on the fortifications, officially named Fort DeRussey, but Polk referred to the site as the “Gibraltar of the West.”  They soldiers installed 140 siege guns along the heights and extended a huge chain across the Mississippi to slow down the Union gunboats and other vessels long enough to bombard them with cannon fire . By the time the Confederates finished their work, Columbus had become the most heavily fortified place in North America and was deserving of its nickname.

One of General Polk’s unique ideas was to stretch a one-mile iron chain across the Mississippi River to keep Union forces from heading downstream. Today it would seem like a logistical nightmare to pull off, but considering this was over 150 years ago makes the idea all the more impressive. The chain was suspended in the river on a pontoon bridge, made up of several flat-bottomed boats. By removing certain boats, the chain was raised or lowered. However, the system was flawed and soon the chain broke. It was discovered in 1925 during a landslide.

On September 4, 1961, the Confederate troops moved into Columbus believing the nearby Union troops were about to do so as well. In addition to fortifying the town, General Polk knew General Grant had a flotilla, so he planned to place a huge chain heavily anchored across the Mississippi to stop him. While the Confederates won the town, they lost the Commonwealth by violating Kentucky’s fragile neutrality pact.

With that backdrop, enter the two very differing personalities of General Grant and General Polk described above.  General Polk saw how important and vulnerable the port of Columbus was for both sides. He ignored the neutrality agreement and decided to occupy Columbus in order to make it a stronghold, which appeared to be a strategic move. General Grant was also eying the same area, he also broke the neutrality agreement by securing Paducah, and learned of the stronghold. Using great strategy, he decided to attack the smaller and more vulnerable forts.

I think to lose Kentucky is nearly the same as to lose the whole game. Kentucky gone, we cannot hold Missouri, nor as I think, Maryland. These all against us, and the job in our hands is too large for us. Abraham Lincoln – September 1861

In the meantime, there was a great heated debate and political maneuvering, a divided legislature, Kentucky declared for the Union. That declaration was a victory for President Lincoln who saw the allegiance of the slaveholding border states – and Kentucky in particular – critical to the North winning the war. Little did he or anyone expect it was become as bloody as it did nor last as so long. 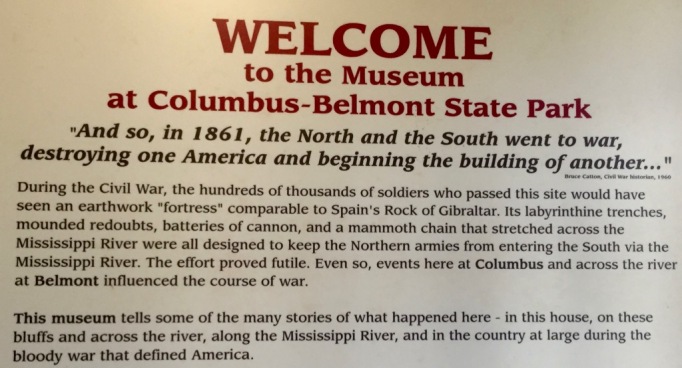 The earthwork “fortress” was comparable to Spain’s Rock of Gibraltar.

Although Kentucky declared itself for the Union, its citizens remained divided. The Civil War is often said to pit brother against bother; and this become more evident in Kentucky. One of its senators. John Crittenden, who had fervently tried to avert the war, saw two of his sons become Civil War generals, but in opposing armies. Mary Todd Lincoln, a Kentuckian and the wife of the President, saw her family split. Her husband was commanding the Union army and her brothers fighting against it. Of the 135,000 Kentuckians who fought in the war, 90,000 joined the Union army and 45,00 fought for the Confederacy.

Blessed are the peacemakers, for they shall be called children of God. Matthew 5:9